Last edited one year ago
by Demo writer 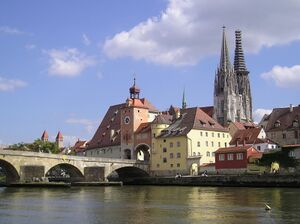 With more than 165,000 inhabitants, Regensburg is the fourth-largest city in the State of Bavaria after Munich, Nuremberg and Augsburg.[1]

The medieval centre of the city is a UNESCO World Heritage Site. In 2014, Regensburg was among the top sights and travel attractions in Germany.

Regensburg has three universities and is one of 3 regional centers in Bavaria.

Throughout the centures, the city was known by a variety of names. It is still known in the Romance languages by a cognate of its Latin name of "Ratisbona" (the version "Ratisbon" was long current in English).

Between 1135 and 1146, the Stone Bridge across the Danube was built at Regensburg. This bridge opened major international trade routes between northern Europe and Venice, and this began Regensburg's golden age as a residence of wealthy trading families.

Regensburg became the cultural centre of southern Germany and was celebrated for its gold work and fabrics.

Regensburg is situated on the northernmost part of the Danube river at the geological crossroads of four distinct landscapes:

Twice a year takes place the Regensburg Dult, the city's Volksfest, which is Bavaria's fourth largest. The Bürgerfest (citizen celebration) in the Old Town is every two years, attracting over 100,000 visitors. Every second weekend in July, knights and other medieval people come together at the Regensburg Spectaculum, a medieval market, on the Stone Bridge. Every December, there are several Christmas markets all over the city.

With over 500 bars, restaurants, clubs and other locations in the inner city alone, Regensburg provides a rich and diverse nightlife due to its young population.

Tour 1 Knowledge Base ‹ Calendar
Retrieved from "https://en.demo.bluespice.com/w/index.php?title=Regensburg&oldid=1252"
No categories assignedEdit